With the release of Octopus 3.5 you can now utilise Azure AD authentication. This document is an overview of how I have implemented this.

During the authentication with Azure AD, the user will be directed to an Azure page to enter their credentials. As part of the authentication flow, Octopus passes a Reply URL to tell Azure where to POST the user’s security token. This URL must be added to a trusted whitelist in the App configuration or the authentication flow will be terminated by Azure. In New Azure Portal, Active Directory, App Registrations, Settings, Reply URLs, I have added a Reply URL of https://your-octopus-server/api/users/authenticatedToken/AzureAD

Please take care when adding this URL! They are case-sensitive and can be sensitive to trailing slash characters

In order to manage user/team membership via AAD, I have had to configure some Roles for the App. To add the Roles I have had to edit the App’s manifest. In the New Azure Portal, go to Active Directory, App Registrations, find the App you want and select it, click the Manifest button at the top.

This is what I have added into the Application Manifest for the Octopus App. I have defined 3 x AppRoles in the Azure App.

The ID value is just a random GUID that i generated with Powershell New-Guid command. The property Value is what will be used to add to Octopus Teams in order to manage access via AAD Roles and AAD Security Groups.

The AppRoles we have just defined do nothing currently and should be assigned to Azure AD Security Groups to give us a central place to administer access into the App. All of the Team members should be placed in the relevant Security Groups when access is needed and removed from the group when no longer required. Creating the groups is done in Active Directory in the New Azure Portal. In New Azure Portal, Active Directory, Users and Groups, All Groups, Add. Create the required groups, following the naming convention of existing groups and ensuring there is a meaningful description used also.

I have created 3 x AAD Security Groups, each one will be associated with the AppRoles and Octopus Teams.

No Users should be added here. Only Security Group membership should be used for Application Access

Now we have created the AppRoles and Security Groups, they have been assigned to the App to allow access. When they get passed through to Octopus we need to assign those AppRoles to a Team in Octopus, so it knows what permissions the Users in the Security Groups will receive in Octopus. Log in to Octopus Deploy Server and go to Configuration, Teamshttps://your-octopus-server/app#/configuration/teams. We already have 3 x Teams that match that match the AppRoles and Security Groups I created earlier. Go into the Team, click Add External Role at the bottom. Using the Value you defined in the Manifest file earlier as the Role ID, give it a meaningful Display Name following the existing convention, then click Add. Do this same procedure for the other Teams in Octopus

The Octopus Server now needs to be told to use the AAD Auth Provider. By default Octopus uses its built-in User Database only. Octopus now supports the following Auth Providers

These can be changed at the CMD Line on the Octopus Server In order to set AAD as the Auth Provider there are two values we need from the Azure Portal. The Client ID and Issuer. 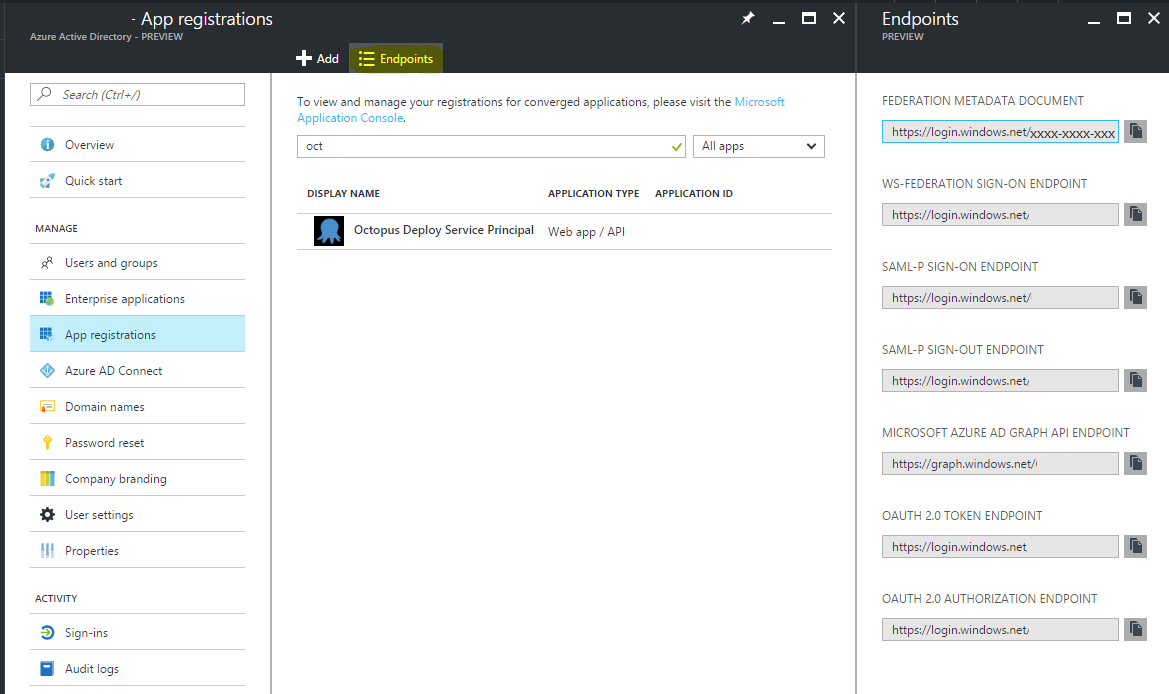 Copy the OAuth 2.0 Authorization Endpoint and delete the /oauth2/authorize section from the end of the URL

Setting the Client ID and Issuer in Octopus

Once you have those values, run the following from a command prompt in the folder where we have installed Octopus Server “C:\Program Files\Octopus Deploy\Octopus” This will enable Azure AD as an Auth Provider and configure the required parameters.

I have also disabled the internal user database of Octopus using the following command. To ensure all the users reside in AAD only.

Then to configure SSO, I have ran the following command, which disables the login prompt.

If you now logout of Octopus. You will now be automatically signed in with your Azure AD credentials 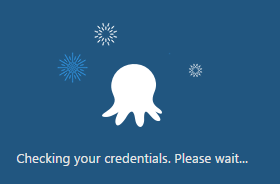